Still Crazy After All These Years - 2LP (Mobile Fidelity)

Exorcising personal demons and reflecting on midlife circumstance, Paul Simon frames Still Crazy After All These Years as a post-divorce statement yet retains cutting humor and lighthearted cynicism that make every song universally appealing. A succession of brooding vocals, jazz-laden arrangements, contagious hooks, and an appearance by the famed Muscle Shoals rhythm section further conspire to make the record a lasting template for mature pop music that offers meaningful contemplation of relationships, transitions, disillusionment, and responsibility. A chart-topping statement that coincided with Simon's ascent as a superstar solo artist, it now sounds more immediate, cunning, and refined than ever courtesy of painstaking restoration.

texture, and dark-black backgrounds showcase the scope and craft of Simon's melodies--as well as the intentional conflict between the tense lyrical content and deceivingly pleasant aura. Indeed, in its original review of the album, Rolling Stone pertinently observes, "There is something ominous about the disparity between Simon and Phil Ramone's typically elaborate, creamy production and the downbeat theme of the album." Thanks to Mobile Fidelity, that critical divide has never sounded better or been more alluring.

1. LP
Still Crazy After All These Years
My Little Town
I Do It for Your Love
50 Ways to Leave Your Lover
Night Game
2. LP
Gone at Last
Some Folks' Lives Roll Easy
Have a Good Time
You're Kind
Silent Eyes
Se Specifikationer
Tilføj til ønske liste
E-mail
Gå til slutningen af billedgalleriet 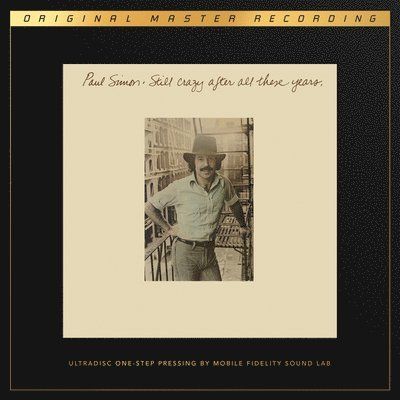